A glimpse into the future: The 2012 Realtors Housing Forecast Seminar 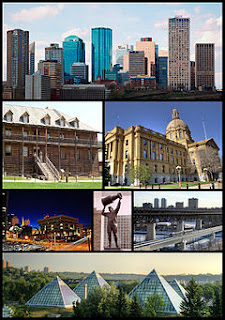 Yesterday I had the pleasure of attending the annual C at the Northlands Expo Centre. I love attending this annual event because it gives me a quick overview of what’s been happening in the real estate market in the last year and also gives me some educated opinions on what to expect in the coming years.
Here’s are some highlights from the forecast:


-nothing really new here. Alberta has oil. This translates to jobs and money. Lots of both!
-Peter explained some of the projects currently in the works as well as projects slated for future development. The amount of money and the size of these projects is staggering.
- Here’s an excerpt from one of the presentation slides: If further development of the oil sands continues, the economic impacts of the existing and currently under construction projects would continue into the future
• Generating $4.7 trillion of GDP Growth
• Direct employment would grow from 132,000 to 533,000 jobs by 2035
• Royalties to the Alberta Government would grow from $3.5 billion to $60 billion per year by 2020. This is based on the assumption that crude oil prices will continue to rise

-Canadian domestic conditions remain good, Alberta continues to outperform the national average
-Slower US expansion will slow growth, particularly in Eastern Canada
-2011 has been a solid year for GDP growth & outstanding employment growth in Edmonton
-Alberta’s labour market is beginning to tighten. Unemployment rates that go significantly below 5% will trigger wage increases and higher inflation. Most of the jobs lost in 2008 & 2009 have now been recovered.

This was one of my favourite presentations as I really love to learn about the new and exciting projects the City has on its radar. Listening to this presentation made me realize how lucky we are to live in a place with such prosperity and development. John spoke about a few cities in the United States which have decreasing populations and the problems that come with it.
We are experiencing the complete opposite in Edmonton, and we have money to spend on a variety of exciting projects such as:

1. City Centre Redevelopment: there is a 15 month master plan process currently underway to revitalize Edmonton’s downtown. There is a lot of money and time being spent on a variety of projects in our downtown core. These include:


a. the LRT expansion which is currently underway which includes a 30 year plan to extend the LRT in six different directions within the city. The new look and feel of the expansions will be more European in style and feel which will include LRT tracks that weave through communities using low-floor technology instead of the old style where the tracks cut communities in half


b. Proposed Sports & Entertainment District: new arena project: this project has been hotly debated in the last few years but now has the go-ahead


c. The Quarter’s downtown: I actually heard this new project being discussed on CBC radio this morning. It is a city initiative to revitalize the area east of Jasper Avenue & 97th street. Apparently when the Hudson’s Bay Company moved out of this area in the early 1900’s the neighbourhood became rundown and has been so ever since. The City has spent a lot of money purchasing the land in this area and are upgrading the service lines within the area to get it ready for the future. The plan for this area includes a community housing around 20,000 people in a mixed use area including mostly pedestrian streets and mixed use homes including artist live-work spaces. I am really excited about this project! It’s about time something promising happened to this prime land in the heart of our city


d. West Rossdale: the former power plant (and historic building) will be transformed into a “diverse, sustainable neighbourhood with a broad range of commercial, retail, public parks and other amenities”


e. Other notable projects include: the news, soon-to-be-built, museum downtown and the re-development of the old city airport to a new sustainable neighbourhood

On a side note, I also heard on the radio this morning that the developers that built the Icon Towers on 104th Street have just purchased a surface parking lot on 104th street and 102nd avenue to build another high rise mixed-use building. 104 Street is one of my favourite places to be on a Saturday morning in the summer...looking forward to seeing this new project break ground. It’s already a great street, sounds like it’s going to be even better!

I am so excited about all of these amazing projects! It’s exciting to live in a place that is growing and improving!

-economic growth forecast 2012 +2.3%, 2013 +3.0%
-Inflation at manageable levels 2.1%, midpoint of target range 2012/2013
-Bank of Canada held steady on rates since September 2010. Next move likely in 2012/2013.
-Household debt levels closely monitored and many are at risk in a rising rate environment
His thoughts on the global economy?
-USA faces considerable challenges to regain its influence
-American banking system is stabilizing, a requirement for full recovery
-European banks under tremendous stress, painful austerity measures necessary
-Oil prices expected to remain elevated, average in the triple digits

• Full time employment grew rapidly in 2011- expect the housing market to follow in 24-48 months. The average weekly earnings remain on an upward trend, Alberta’s net migration was up in 2011 (still below peak levels).

• Edmonton’s Resale Home Market: ownership costs remain below the peak levels seen in 2007 & 2008 (this makes sense as prices and interest rates are lower than during 07 & 08). The current market still favours the buyer meaning price gains will remain modest in the short term.
• Edmonton’s New Home Market: prices to edge upward in 2012 but to remain below peak levels

• Edmonton’s Rental Market: activity levels of rental housing starts have rebounded in 2011 and are higher than in 2007. Improved demand for rental properties have helped vacancy rates come down, as vacancies decrease rents will move upward.

Forecast (Residential Sales, Single Family Dwellings):
• New home construction continues to provide opportunities at the outer edges of the community
• Strong demand for home renovation materials
• String preference for a “home of their own” with increased privacy, independence and the “joys” of home ownership
• Labour shortage in Alberta will create in-migration and maintain the demand for home sales

My two cents: as you can tell from the above, this was a very positive forecast for 2012. All signs indicate that Alberta is a great place to live and work. Interest rates remain at low levels, the real estate market is healthy, and the economy is robust. The future of this city looks bright!